The NBASE-T Alliance website defines the technology as follows:

NBASE-T™  is a proven technology boosting the speed of twisted pair copper cabling up to 100 meters in length well beyond the designed limits of 1 Gbps.

So what happens to MGBASE-T given that Aquantia was a part of both? My hunch is that it fizzles away and the other vendors who were working on it (no names here) lost in the race to Cisco, Freescale, and Xilinx.

Recently I wrote about the Networking Field Day 8 presentations on Nuage Networks and Big Switch Networks. A noticeable absentee at Networking Field Day 8 was the co-host of the popular Packet Pushers show, Greg Ferro. What was so important that kept Mr. Ferro away from NFD8? Well, it turns out that he was attending Intel Developer Forum 2014 and discussed his findings on his show – The Network Break (I guess you can call me a Greg Ferro stalker). This prompted me to dig a bit deeper into Intel’s Software Defined Infrastructure vision and what I think it means to the networking industry. 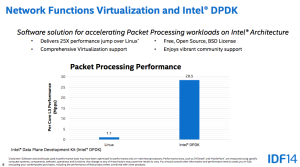 DPDK has actually been around since 2010. As defined on its website, it is a set of libraries and drivers for fast packet processing on x86 platforms. It runs mostly in Linux userland. This allows for higher levels of packet processing throughput than what is achievable using the standard Linux kernel network stack. In fact, according to these slides, it can achieve a 25X improvement in per core L3 packet performance over standard Linux. Using DPDK, the latest Intel chips can support Geneve, which is a highly extensible UDP encapsulation for overlays. Geneve claims to perform flexible packet matching of any type of tunnel protocol (such as VXLAN and NVGRE). Within the Geneve Header is an Options field that can contain metadata and context, which is invaluable for NFV & service chaining). So, it is not surprising that Intel has a partnership with VMware (the champions of overlay networks) that is catered to NFV solutions. 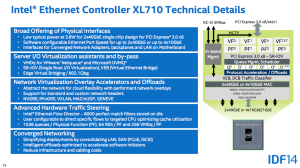 The Ethernet Controller XL710 is 40 Gbps ready on a single virtual core, 160 Gbps per CPU socket. It can terminate Geneve tunnels at line rate (39.39 Gbps on the 40 Gbps adapters) as the IDF14 demos showed. The reason it can do this is because of Receive Side Scaling for VXLAN, which balances CPU utilization across cores.

Some of the packet/security/compression acceleration features of the E5-2600 v3 chipsets, powered by QuickAssist technology (which does stateless offload and protocol acceleration), are 100 Gbps SSL Termination (a boon for SEO), 160 Kops (key operations for IPSec), 80 Gbps Platform compression (applicable for Big Data analytics like Hadoop), which should keep pure play networking vendors (including firewall, VPN Concentrators, and load balancer) on their toes.

The overlay vs underlay network debate has become a hot topic in recent years, perhaps best exemplified by the Cisco ACI vs VMware NSX solutions. VMware believes that overlays on top of bare metal servers running X86 chips are the way of the future. They believe that protocol offload technologies like QuickAssist are the solution for building scalable infrastructures. Pure play vendors like Cisco believe that there is still value in custom networking ASICs on switches that form the underlays. Still other networking startup vendors like Pica8, Cumulus Networks, and Big Switch Networks are the poster children of bare metal switches, i.e. switches that leverage merchant silicon, such as Broadcom or Marvell, and whose sheet metal is assembled by white box vendors such as Celestica, Delta Networks, Acton, or Quanta.

How will Intel’s recent announcements affect networking vendors? Well, network virtualization poses very different challenges from server virtualization. Protocol offload has been around for several years, but isn’t as ubiquitous as you’d think: I ran into performance issues first hand with TCP offload in 2011 when disabling it used to give much better results. And simply slapping an overlay on top doesn’t solve every networking problem. Scaling in network virtualization is far more difficult than scaling in server virtualization. For example, the number of ACLs needed grows quadratically as the number of web servers or database servers increases linearly. I think the future is still bright for bare metal switch vendors, but I would love to hear back from you.

PLUMgrid is a Silicon Valley based SDN startup that raised $10.7 million in Series A funding in August 2012. They are still in stealth mode and even SDNCentral hasn’t covered much on them yet. However, things are brewing at this startup, which was mentioned last year in the The Economist and featured in Network World. Details are still thin, but when a company publishes five teaser blog posts in the past two weeks (they started their blog in August 2012), signs point to a larger announcement around the corner.

Their blog posts are unlikely to win a Pulitzer prize. If anything, they have enhanced their mystique by keeping things vague. PLUMgrid shuns the term Network Virtualization as it encompasses legacy technologies, such as VLANs, VRFs, and VPNs. Instead, they like to refer to Virtual Networking Infrastructure (VNI) as the means (i.e. abstraction) to provide a Virtual Network Domain, which they define as an administrative boundary established by the Data Center Operator where the VND operator can: Define, instantiate, and manage its own network needs. PLUMgrid defines SDN as networking technologies that create value in the VNI. Moreover, they wrote of consumption models in a manner that would make unicorns cry. A more concrete set of definitions would have helped.

Datacenter admins are quickly realizing that as appealing as DVS may be, Virtual Broadcast Domains (aka Distributed VLANs) are restrictive when designing proper networking solutions. To overcome the limited capabilities of DVS, multiple vendors are providing solutions pointing towards two different vectors.

I would have liked them to elaborate further on this point. How exactly do data center admins find DVS’ restrictive? Is it the lack of control plane? Is it the presence of Multicast state in the core of the network. I want to know what PLUMgrid’s solution offers that, say, Nicira’s STT doesn’t. They have refrained from describing the problems in their posts.

On point that PLUMgrid made in their blog series that caught my attention was when they wrote this of VNI:

To me that sounds like a plug-in to OpenStack. In fact, I wouldn’t be surprised to see PLUMgrid’s name listed as a member the new open source SDN Consortium called Daylight, which will be announced at the ONS summit in April 2013.

Are they the Secret Company that will come out of stealth mode and present at Networking Field Day 5 March 6-8? Only time will tell.

Edit: I listened to the Open Networking User Group (ONUG) Lippis Report Podcast this morning and PLUMgrid’s CEO, Awais Nemat, reiterated the need to define new vocabulary for SDN ecosystem, such as VNI. He said that the concept of Cloud only started making sense to people once SAAS, IAAS, and PAAS were clearly defined. Based on conversations it has held with customers, PLUMgrid has its eyes set on Consumption Models as compared to Build Models, which the rest of the industry has been focusing on (Northbound/Southbound APIs, CP/DP separation, etc).

Thoughts on Data Centers, LANs, WANs, SDN, Cloud, and anything to do with networks

Thoughts on Data Centers, LANs, WANs, SDN, Cloud, and anything to do with networks